From the beginning, women have sought ways to safely end their pregnancies and control their fertility. Today, the most common methods are in-clinic abortions and FDA-approved abortion pills, also known as medication abortion.

During an in-clinic abortion (sometimes called a “surgical abortion”), a medical professional physically removes the contents of the uterus. During a medication abortion, the pregnant person takes two FDA-approved medications at home to induce a miscarriage. Both options are safe and effective!

Get the facts on abortion. 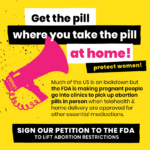 Tell the FDA: Let pregnant people receive the abortion pill through the mail during COVID-19

Throughout the country, patients are turning to telehealth appointments and online pharmacies for routine medical care without having to leave their homes. But for most pregnant people seeking safe and effective FDA-approved abortion pills during the COVID-19 outbreak, the FDA requires them to pick up the first pill (called mifepristone) in person from designated clinics and doctors’ offices — even though the FDA permits them to wait until they get home to swallow it and the abortion itself always takes place at home.

These restrictions endanger pregnant people and the clinics who serve them while further straining the health system, forcing both patients and medical staff to travel during a pandemic, don protective gear, and increase their exposure to potentially sick individuals — with no corresponding health benefit to justify these serious risks.

Learn more about our campaign.

Medication abortion is the method of safely and effectively inducing a miscarriage using FDA-approved abortion pills. Medication abortion can be used to end a pregnancy up to 10 weeks from the first day of your last period. Learn more about how it works and what to expect.

The emotional experiences of a medication abortion and a spontaneously occurring miscarriage may be very different. There’s no right or wrong way to feel! But the physical process, risks, warning signs, potential complications, and treatments are the same. Learn more about what to expect when an early pregnancy ends.

Abortion with pills, also called medication abortion, is safer than Tylenol yet unnecessarily restricted in the United States for political reasons. Learn more about current barriers and what the NWHN is doing to remove them.

Abortion is recognized worldwide as an essential part of reproductive health care but private insurance coverage of abortion care in the United States varies widely state to state and is severely restricted nationwide for people with public health coverage through programs like Medicaid, TRICARE, or the Federal Employee Health Benefits Program. Learn more about current barriers to coverage and what the NWHN is doing to remove them.

Abortion opponents have spent years attempting to frighten women by touting a non-existent link between abortion and an increased risk of breast cancer. There is no evidence of such a link and the claim is not supported by research scientists or breast cancer activists.

Our View: Self-Managed Abortion with FDA-Approved Medication Is Safe and Effective

The NWHN seeks to eliminate the full range of barriers to abortion access—from insurance coverage and cost to geography and stigma—that block pregnant people who would prefer provider-led abortion care from receiving it. But we also acknowledge and support the right of pregnant people to end pregnancies on their own, safely, with FDA-approved medicine and without fear of persecution. No one should have to see a doctor, or “get permission” from the medical community, before ending their pregnancy. Learn more about our position.