Affordable vs. Accessible: Health Care Through the Eyes of Women

For the past five years, U.S. residents have listed the accessibility and affordability of health care as their top concern, according to Gallup. Going back further, they’ve reported “personally worrying a great deal” about health care since 2001. Voter concerns about access to quality, affordable health care has played a significant role in the last three presidential elections and is likely to play a role in this year’s election too. …

For the past five years, U.S. residents have listed the accessibility and affordability of health care as their top concern, according to Gallup. Going back further, they’ve reported “personally worrying a great deal” about health care since 2001. Voter concerns about access to quality, affordable health care has played a significant role in the last three presidential elections and is likely to play a role in this year’s election too.

But what do “affordable” and “accessible” mean? What do they look like for women, and how do they impact marginalized women differently?

Through our Raising Women’s Voices initiative, the NWHN fought hard for passage of the Patient Protection and Affordable Care Act (ACA, sometimes referred to as “Obamacare”) in 2010. The ACA was the first significant expansion of health insurance coverage in a generation. The law has successfully increased the number of people with insurance, expanded critical consumer protections (particularly for women!), promoted prevention and wellness, and improved the health of millions of Americans. But as those Gallup polls make clear, there’s still much more to do to achieve universal coverage. 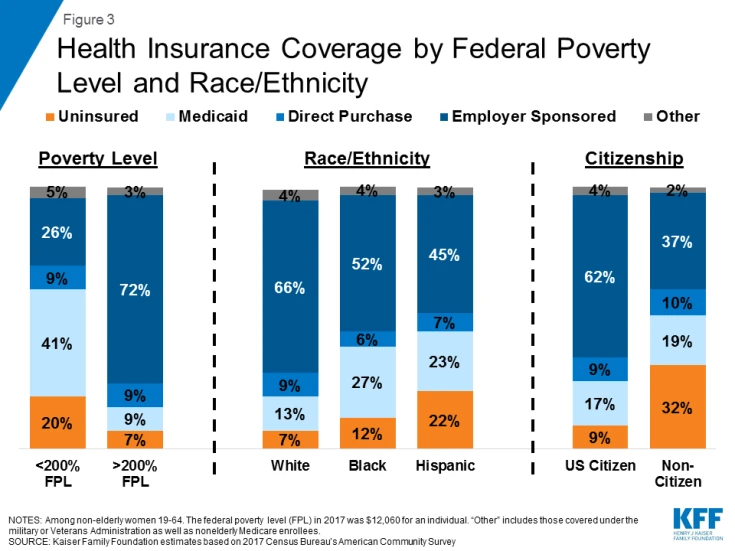 When it comes to health care, affordability can be measured through the amount and type of coverage provided; the combined cost of monthly premiums, deductibles, copays, and coinsurance; and delayed or skipped care.

Women live in poverty at higher rates than men do and are less likely than men to have employer-provided insurance under their own name. For those who do, it can still be difficult to afford health care due to increasing deductibles. Data show that even when employers pay a bulk of the premiums, the average deductible left for employees to cover is more than $1,200. Low-income women, women of color, immigrant women, and queer and trans people are at an even greater risk of being uninsured. These groups are more likely to have jobs that do not have employer-provided insurance, further increasing their risk of being uninsured.

According to the Kaiser Family Foundation (see chart below), 20% of women with incomes under 200% of the Federal Poverty Level (FPL) are uninsured, 12% of Black women and 22% of Hispanic/Latinx women are uninsured, and 32% are non-citizens. However, even for those women who are insured, services such as dental and vision care are not always included. When these services are not covered by insurance it has a large effect on their choice to delay or skip receiving that care.

About one in ten women are uninsured—this means that 11% of women have inadequate access to care, get a lower standard of care (when they are in the health system at all), and have poorer health outcomes. We know that low-income women and women of color are at a greater risk of being uninsured.

However, there are additional barriers to accessible health care beyond not having coverage. Child care, reliable transportation, the ability to take time off of work, and other primary support services are all factors that impact a woman’s ability to access health care; once again, these factors predominantly impact marginalized women.

Low-income women and women of color are also more likely to face employer-created obstacles balancing work and familial obligations. This means that their ability to balance their work and family heavily relies on their employer’s attitudes, the presence or absence of flexible workplace policies, child care cost and availability, and access to time off for family emergencies. This not only impacts their ability to maintain a job but it also impacts their ability to take care of themselves, such as being able to schedule their own medical appointments. In addition, transportation is a key issue. If women live in a rural area they struggle with unreliable public transportation at a disproportionate rate. Similar to getting child care and time off, this lack of transportation also impacts women’s ability to access proper health care (it can impact what doctors they can see, when their appointments are made, and whether or not they can even get to their appointments).

At the NWHN, we continue to push for improvements to the ACA, to fight Trump administration sabotage, and to support other health reform efforts being debated in Congress to make high quality health coverage affordable for all. But we’ve also pushed for policies that make it accessible too. That’s why we’ve been fighting against state efforts to deny “non-emergency medical transportation” to low-income people and pushing for paid family and sick leave policies that give low-income women the same flexibility at work that many wealthier women already enjoy.

The Trump administration’s ongoing attempts to sabotage the ACA and its support for repealing the law altogether through the courts mean that even the health care gains we’ve achieved thus far are at risk. You can stay informed on any updates or changes to the ACA by following us on social media. Then call your representatives, ask questions, voice your opinion, and continue the fight for affordable and accessible health care!