COVID-19 has all but shut down America. As many as 70 percent of small businesses have experienced prolonged closures; 22 million jobs were lost during the pandemic, and only 42 percent of them have been regained; and 47 states have allowed school districts to continue some form of remote learning, due to the threat of infection. As of late September, COVID-19 has resulted, as of this article, in more than 6 million cases and over 200,000 deaths in the U.S. alone.

Leading epidemiologists believe that, as the flu season approaches, COVID-19 cases will worsen. According to a report from the National Urban League, based partly on data from Johns Hopkins University, Black and Latino people are three times as likely as white people to become infected with the COVID-19 virus, and twice as likely to die from it.

It is clear that nationwide stay-at-home efforts and social distancing must continue until there is a better way to stop the pandemic’s spread. With the prospect of many more infections ahead, the rapid development of a safe and effective vaccine is critically urgent. One way to know if a vaccine drug works similarly and as effectively for as many people as possible is to test it on a diverse pool of individuals with diverse ethnic and racial makeups, which reflects the actual population who will ultimately use the vaccine. The outdated view that “one size (or treatment) fits all” has been disproven many times, including with respect to heart disease, and hypertension screening and treatment. When significant segments of the population are not included in clinical trials, it becomes impossible to determine if therapies will work for them in the intended way.

The NWHN has long fought for clinical trials that adequately represent real-world patient populations. In 2012 we successfully lobbied Congress to enact legislation requiring the U.S. Food and Drug Administration (FDA) to create an action plan to increase trial diversity and to publicly report demographic subgroup analyses for all new drug approvals. In 2016, we testified before the FDA on the need to “do more than simply encourage participation. The FDA can and should refuse to approve new drugs and devices when there is insufficient trial diversity.” 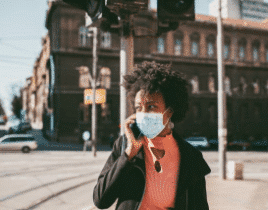 Instead, the FDA has often seemed too close to the drug- and device-makers they are supposed to be regulating, and too accommodating to industry’s demands for quicker, less expensive trials — with predictable results. Black, Indigenous, and People of Color (BIPOC) are under-represented in the COVID-19 vaccine clinical trials. According to Biotech Moderna, Black, Latinx, American Indian, and Alaska Native individuals comprise just 27 percent of the COVID-19 vaccine’s Phase 3 trial, which has more than 13,000 participants.

This is not new. Vaccine trials have traditionally failed to include BIPOC communities. The persistent lack of diversity in clinical trials is as much a moral issue as it is a medical one. According to data collected from FDA clinical trials that occurred between 1994 and 2014, participation by Black people ranged, per trial, from 1.8 to 3.5 percent; Asian participation accounted for less than 2 percent; and Native American participants were not reported in nearly two-thirds of the trials. Keep in mind that Blacks Native Americans, and Asian Americans, make up 13, 1, and 6 percent of the U.S. population, respectively.

There are a lot of reasons for this under-representation. In addition, social determinants of health and socio-economic factors (including logistical challenges, income level, and health insurance coverage) contribute to the lack of diversity in clinical trials. Participating in a clinical trial involves taking time away from work and/or home responsibilities, traveling to the trial site, and finding alternative caregivers for children and other family members. When these factors are challenging, it inadvertently discourages people from participating in trials.

Finally, BIPOC often hesitate to participate in clinical trials due to their significant levels of distrust of the medical system, which stem from historical victimization in medical experiments. From the history of nonconsensual sterilization practices to experimentation on Black bodies (including the Tuskegee experiment) distrust of clinical trials on the part of BIPOC is valid and understandable.

While very real, these obstacles can be overcome. Drug- and device-makers could invest time and money in community outreach and take steps to ensure that people from all backgrounds can afford to participate in their trials. But without any penalty from the FDA for failing to do so, sponsors have little incentive to take on the extra cost. And in fact, companies that have heavily invested in demographically robust clinical trials have sometimes been chastised by the FDA if their products appear to be less effective than those that gamed the system by excluding non-white trial participants.

This lack of representation in clinical trials is one reason that, compared to their white peers, BIPOC have less-optimal outcomes from the therapies developed by such trials. These less-optimal outcomes include more rapid disease progression, and dangerous side effects. The result is worse health, increased costs, and the need for more doctor’s visits. The potential impact with respect to COVID-19 is truly frightening, particularly given the pandemic’s disproportionate impact on BIPOC communities.

The effort to find a cure and effective treatment for COVID-19 is a huge opportunity for both the federal government and private companies to implement morally, ethically, and scientifically valid practices around clinical trials and vaccine distribution. On September 8, 2020, nine Biopharma leaders signed a joint pledge that they would hold themselves to “high ethical standards and sound scientific principles” in the development and testing of a potential COVID-19 vaccine. This is good news; but, we note that these standards should be espoused and promoted by any company conducting vaccine development and developing treatment medications. It shouldn’t require a company to sign a specific pledge, but hopefully doing so will have some positive impact.

Take Johnson & Johnson (J&J), for example. Although the company signed the pledge, J&J has faced more than 19,000 lawsuits by plaintiffs alleging that its talc-based baby powder causes ovarian cancers. J&J has refused take the product off the shelves, and recently doubled-down on efforts to sell it abroad. Also significantly, J&J has a history of targeting Black and Brown communities for sales after concerns were raised about potential contamination of their products in the U.S. Internal documents from Johnson & Johnson reveal that the company knew for decades that its baby powder posed potential health risks but doubled down on aggressively targeting women of color, distributing free samples in Black churches and advertising on Spanish-language radio. How will we know if J&J is acting responsibly if the company manufactures and markets any COVID-19 vaccine or treatment?

In order to engage BIPOC in clinical trials, companies and our government both need to espouse and engage in values, ethics, and practices that protect human lives; recognize and respond to the challenges that impact participation; and earn the trust of rightfully suspicious potential trial participants. This requires engaging members of the BIPOC communities at every stage of the process. Companies must address social, economic, and cultural barriers that prevent specific communities from participating in research development and clinical trials. And the FDA must put real teeth behind its stated goals for trial diversity. Perhaps most importantly, governments and companies must ensure that any FDA-approved treatment is safe for everyone who might use it; doing so requires including an appropriate number of diverse individuals in all of the trials’ test phases.

In short, those who are working to resolve the COVID-19 crisis must ensure that they’re attentive to, and explicitly value, BIPOC lives and energy.