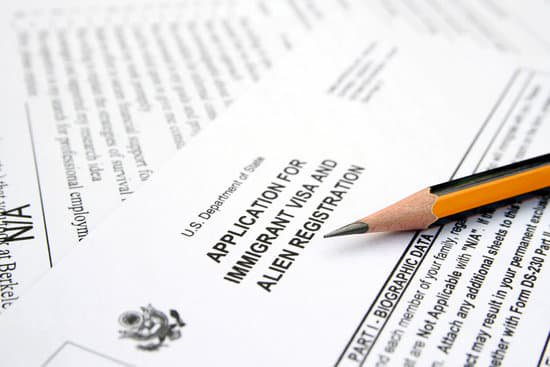 Last month, the Trump administration finalized a radical new rule as part of their larger attack on immigrant communities. Known as the “public charge” rule, it’s a particularly cruel and short-sighted example of the administration’s on-going attempt to limit immigration of poor brown communities, primarily from Latin America (specifically Central America), as well as harm  immigrant communities already residing within the U.S. The rule will further force immigrant families to choose between receiving needed federal aid or being able to apply for green cards, visas, or changing their legal status. Additionally, this radical rule would also allow for immigration officials to have a greater, and personal, say on the future of immigration.

What is the Public Charge Rule?

The idea of a “public charge”—defined as someone who is “likely to be primarily dependent” on the government for subsistence—was first introduced into U.S. immigration law during the 1880s’ wave of hostility toward Chinese, Irish, and southern European immigrants. Its purpose has always been to discriminate against poor and brown immigrants. In the 1990s, lawmakers included cash-based assistance (such as TANF, Temporary Assistance for Needy Families) and long-term care as the only benefit programs that counted towards being considered a public charge. Since then there have been no changes.

The public charge rule is used by immigration officials to decide whether a person can enter the U.S., get a green card, or change their legal status to lawful permanent resident (LPR). This is done primarily through analyzing all of a person’s circumstances—such as their health, income, English language skills, level of education, etc.—and determining whether the person has used or has the potential of using certain benefit programs.

The new Trump rule significantly expands what qualifies someone as a “public charge.”  Under the Trump rule, immigrant officials can also consider the use of Supplemental Nutrition Assistance Program (SNAP, also known as food stamps), federal public housing and Section 8 assistance, and Medicaid (except for emergency services, children under 21 years, pregnant women, and new mothers).The main goal of the proposed rule is to ensure that those immigrants who are being legally admitted into the U.S. or who are changing their legal status are “self-sufficient” and “do not depend on public resources”. In addition, the new rule will now consider earning less than 125% of the federal poverty level—approximately $15,000 for individuals or $32,000 for a family of four—as a negative marker against any immigrant. Even if an immigrant is not currently receiving or eligible for a benefit, immigration officials can use this information to infer if that person is likely to use any of those benefits in the future.

The public charge rule is not just a direct hit on the immigrant community but also disproportionately harms women and children from Latin America. According to the U.S. Census Bureau, 80% of single-parent households are led by women, this means that women are more likely to have lower than the required minimum income as well as potentially need additional public benefits. Women on Medicaid during their pregnancy, including prenatal care and up to 60 days postpartum, are officially excluded from the definition of public charge. However, the news of the new rule has caused enough fear within the immigrant community that many are choosing not to access health care that they and their children are legally able to receive. This will cause existing health disparities to widen, fewer children will be vaccinated, fewer women will receive prenatal care, and fewer women will be treated for preventable diseases.

The new rule’s greatest impact is fear—by design. Because the rules are both cruel and ambiguous, with key decisions left up to arbitrary determinations of individual officials, immigrants have no way of knowing whether accepting assistance will ultimately harm them or their family members. Fear deters immigrants from obtaining proper health care that they are legally entitled to receive.

That’s why it’s important to break down what has changed and what hasn’t. This chart from from Protecting Immigrant Families shows which benefits are included and excluded from the finalized public charge rule. It is important to also note that the rule is not retroactive, meaning that benefits (other than cash or long-term care at the government’s expense) that were used before the rule takes effect on October 15th will not be considered as a public charge. Additionally, any benefits used by U.S. citizen children will not be used against their parents/families. 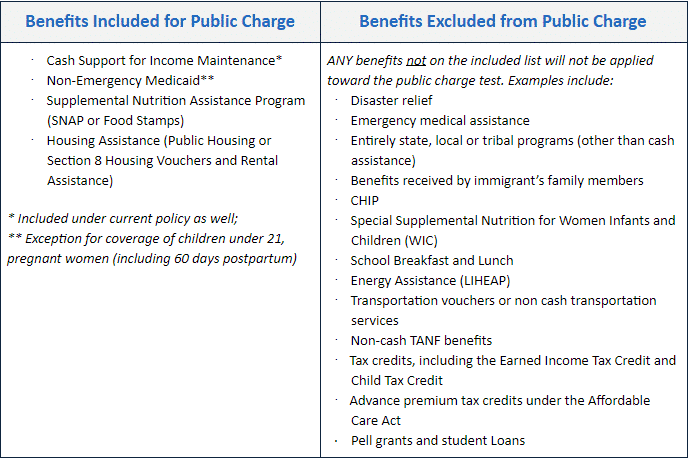 Injustices along the U.S.-Mexico border have highlighted immigrant rights and immigrant health in the U.S.. The administration’s rhetoric and other policies have already done enormous damage to immigrant health and human rights. In recent months we have seen children being separated from their families, children suffering from post-traumatic stress disorder (PTSD) symptoms after experiencing separation or immigration raids, children dying of the flu, women not being able to access menstruation products and seen bleeding through their pants, and women unable to access abortion care. In addition, the fear of public charge is already impacting the community. The greatest example of this is the aftermath of the shooting in El Paso, TX, where victims chose not to seek medical help out of “fear over immigration status”.

I cannot repeat this next statement enough: IMMIGRANT HEALTH IS A U.S. PUBLIC HEALTH ISSUE and we are in the middle of a public health crisis. Everyone has the right to live a healthy life regardless of their immigration status. As a leader of the developed world, the U.S. should be striving to care for everyone who currently resides within the country. It will never be in the best interest of public health to have sick women and children living in the country no matter their immigration status. The government should aspire to provide the proper care for anyone living in its borders. In addition, “immigrant” does not mean “undocumented” and “undocumented” does not mean “not human.” Everyone who is in the U.S. should be able to access proper health care as if they were a U.S. citizen. If the previous examples of injustices were not enough, this new public charge rule is another example of this administration’s continued step toward targeting the immigrant and Latinx community.

What can we do about it?

In addition, the new public charge rule does not go into effect until October 15th of this year. This means that there is still some time for already existing legal challenges that have been put forward to unfold, as well as time for you to speak to an expert for more information or to call your member of Congress.