Over the last few years, there has been a surge in the promotion of long-acting reversible contraceptives (LARCs) such as intrauterine devices (IUDs) and implants like Nexplanon. LARCs are highly effective in preventing pregnancy, last for an extended period of time, and work without user action once they are inserted. These characteristics make them a valuable addition to the mix of contraceptive options.

Taken from the November/December 2016 issue of the Women’s Health Activist Newsletter.

But faithful readers of the Women’s Health Activist know that the NWHN has serious concerns that too much LARC zeal can easily turn into coercion, becoming just the most recent in a long line of population control methods targeted to women of color, low-income and uninsured women, indigenous women, immigrant women, women with disabilities, and people whose sexual expression is not respected. (See “The Great LARC Debate” from the July/August 2015 WHA.)

In public forums and private confidences, women report having their opinions ignored and their choices curtailed by clinicians, public health officials, and government programs that emphasize pregnancy prevention over the other myriad reasons why a woman might seek contraception. We see this coercion play out when a program funds a free IUD but not its removal, when a clinic must meet a quota for LARC use or risk its own funding, and when a doctor tells a woman she’s not responsible enough for a method she can control herself. We see it when state poverty relief is tied to LARC use — as California’s was until just this year. And when state Medicaid programs refuse to cover removal — as South Dakota does even now, stating in its 2016 billing manual that it “will not reimburse for the removal of the implant if the intent is for the recipient to become pregnant.”1

Viewed in a long-term context, these policies represent a natural line of progression from earlier population control practices. Following the Food and Drug Administration’s (FDA) approval of the first-generation implant, Norplant, in 1990, state legislators almost immediately sought to impose harsh penalties — including reduced benefits and longer prison sentences — on poor women who refused to use it.2

Fighting this kind of reproductive oppression was a founding principle of the NWHN in 1975. At that time, 30 states had laws on the books allowing them to sterilize their most vulnerable residents without consent. More than a third of women in Puerto Rico had undergone “la operación” —many without knowing the procedure was permanent.43 At just one California hospital, hundreds of immigrant women were pressured into signing sterilization consent forms mid-labor or under threat that their babies would die if they refused to sign. (This story is documented by the award-winning film No Más Bebes.)

Sharing the concerns of many women of color-led groups whose members experienced forced sterilization, the nascent NWHN testified on behalf of Federal protections against sterilization abuse. But, these efforts put it at odds with many allies in the broader women’s movement, like the National Organization for Women (NOW), whose members were more likely to have sought sterilization and been denied it than to have been targeted for forcible sterilization.

Just as it was then, so too today women across the socio-economic spectrum face discrimination in their reproductive care, and those practices still vary greatly based on a woman’s race, income, status, and more. And once again, the NWHN seeks a path forward that acknowledges the lived experiences of women who aren’t always heard in public health debates.

This year we joined with SisterSong: National Women of Color Reproductive Justice Collective to craft a Statement of Principles to guide clinicians, professional associations, service providers, public health agencies, private funders, and others in the provision of LARCs. We believe that women — all women — can and do make good decisions about their own care when they have accurate information and systems that foster real choice.

Our guiding principles are that we strongly support the inclusion of LARCs as part of a well-balanced mix of options, but we reject efforts to direct women toward any particular method. Only affordable coverage of all options — and a comprehensive, medically accurate, and culturally competent discussion of them — will ensure treatment of the whole human being and truly meet the health and life needs of every woman. 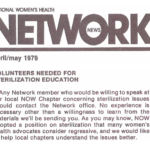 These principles have been signed by a large number of leading public health experts and reproductive health, rights and justice organizations. But our goal is far bigger: we seek to fundamentally change the conversation.

In 1979, we asked our members to speak to your local NOW chapter about sterilization abuse. Today, we ask you to help us share the message from legislators in Congress and at state capitals to doctor’s offices and family planning clinics. The statement can be found at www.tinyurl.com/LARCprinciples. Together we can ensure that every woman has access to the full range of contraceptive methods and the freedom to choose the one that works best for her.