A Brief History of Sterilization Abuse in the U.S. and its Connection to ICE Mass Hysterectomies in Georgia

By Gabriela Salas On September 15, 2020, a whistle-blower complaint alleged that immigrant women in a privately-run Immigration and Customs Enforcement (ICE) detention center in Ocilla, Georgia were being coerced into unnecessary hysterectomies and subjected to medical neglect. In light of this horrific news, the NWHN wanted to present a brief history of sterilization and reproductive abuse in the U.S. and to make clear that this is an on-going issue…

On September 15, 2020, a whistle-blower complaint alleged that immigrant women in a privately-run Immigration and Customs Enforcement (ICE) detention center in Ocilla, Georgia were being coerced into unnecessary hysterectomies and subjected to medical neglect.

What Is a Hysterectomy?

First, a bit of background on the procedure. A hysterectomy involves surgically removing a person’s uterus; afterward, they cannot become pregnant.

A hysterectomy is deemed to be “major surgery” by the Mayo Clinic and should be taken extremely seriously, due to the risk of complications.  In addition, it has significant outcomes that women should consider before having the procedure, including starting menopause early, and an inability to become pregnant. Like any medical procedure, hysterectomy should only be performed with the patient’s full and informed consent.

Sterilization Abuse in the U.S.

Throughout history, women in the U.S. have been subjected to coordinated efforts to control their fertility, including through abusive and non-consensual sterilization. The concept of “full consent” and patients having a “full understanding” when they consent to a procedure is critical. According to the whistle-blower’s complaint, coercive hysterectomies are being performed at the Ocilla ICE detention center.

There is a long and extensive history of reproductive abuse of Black, Indigenous, and people of color (BIPOC) prior to the 20th century. As just one example, in the 19th century, the “Father of Modern Gynecology,” James Morion Sims, developed many reproductive health practices based on experiments he conducted on enslaved Black women, without anesthesia. Sims’ decision to not use anesthesia was based on his false and racist belief that Black people didn’t experience pain as white people did—a belief that still affects the treatment quality and pain management received by Black people in hospitals and clinics today. Today, people are starting to give credit for these medical advancements to the Black women who endured excruciating pain during Sims’ experimentations. To this day, however, we only know the names of three of these women from Sims’ records: Lucy, Anarcha, and Betsey.

Sterilization abuse gained a false patina of scientific legitimacy during the height of the eugenics movement that began in the 1920s and continued well into the 1960s. During these decades, racism was fully integrated into U.S. public health, immigration, and segregation policies, as eugenicists applied emerging theories of biology and genetics to human reproduction. White supremacists embraced eugenics and sought to “improve” U.S. society by expanding white reproduction and limiting reproduction on the part of those deemed to be “unfit.” Sterilization was used to uphold white supremacy and limit the reproductive futures of BIPOC communities, as well as people with physical and/or mental health challenges. In the early 20th century, more than 60,000 people were sterilized in 32 states based on the “science” of eugenics.

State-sanctioned sterilizations reached their peak in the 1930s and 1940s but continued throughout the 20th century. In the 1960s and 1970s, federal programs started funding non-consensual sterilizations, which ultimately affected more than 100,000 BIPOC women. For example: 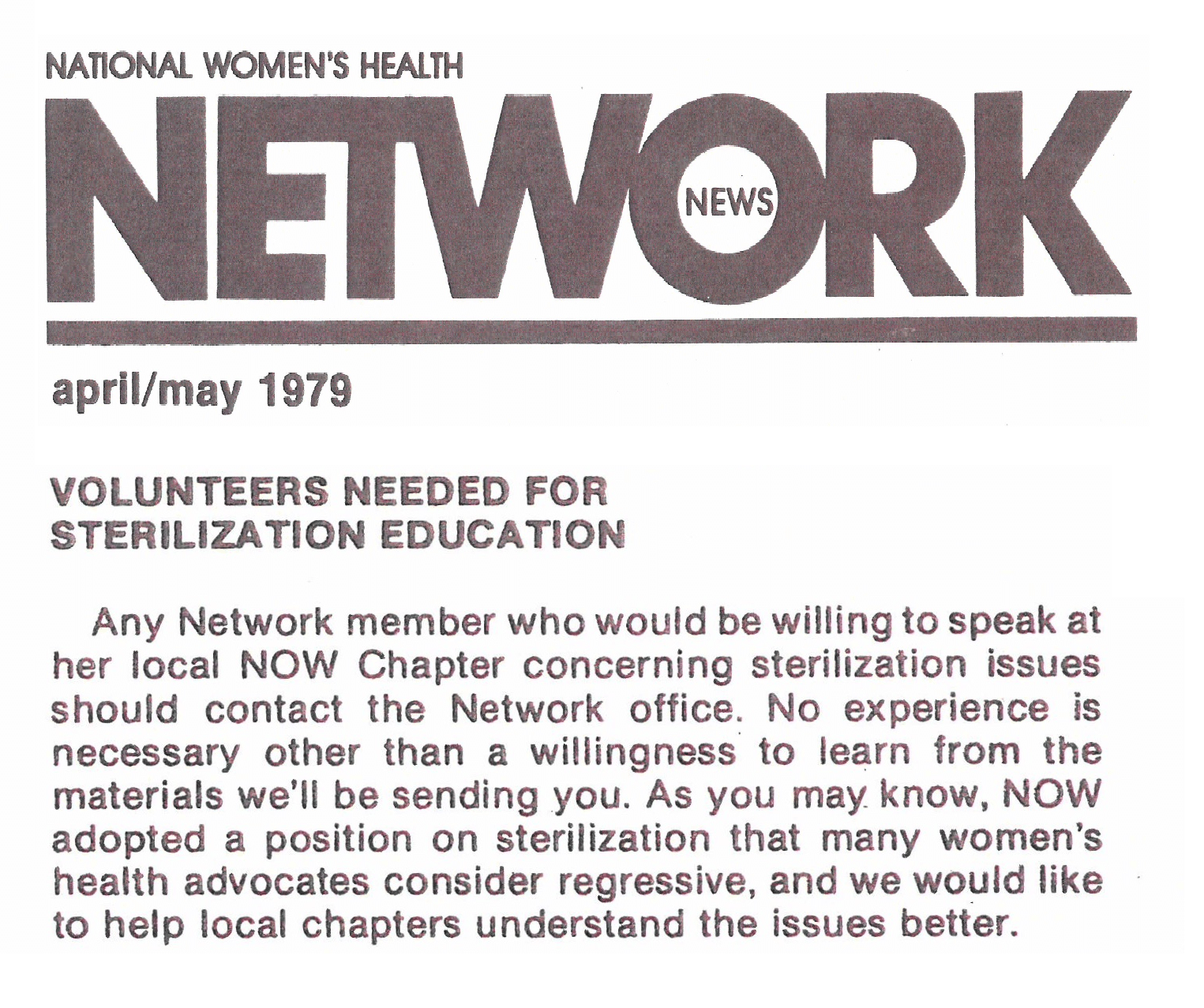 Call for volunteers to speak out against sterilization abuse, printed in the NWHN’s Network News newsletter, April/May 1979

The NWHN Fights Back

In 1975, the newly formed National Women’s Health Network testified at nationwide hearings on proposed federal sterilization guidelines. In support of safeguards proposed by Black and Latina activists, we called for a 30-day waiting period for procedures, a minimum age of 21 years old, detailed informed consent requirements, and a moratorium on government funding for the sterilization of institutionalized women and those deemed “incompetent.”

By 1979, the NWHN was taking on the National Organization for Women (NOW), asking our members to speak at their local NOW chapter in response to its position on sterilization, which opposed any waiting period and disregarded what women of color (and poor white women) were experiencing. In March of that year, federal regulations went into effect restricting federal funds for sterilization to when patients give their voluntary and informed consent for the procedure.

In 1981, as part of its Sterilization Abuse Monitoring Project, the NWHN organized with member groups in New York City and elsewhere to develop an in-depth manual to help local groups monitor hospitals and clinics for cases of forced sterilization. This manual was a first-of-its kind guide.

That same year, the NWHN sent a letter to OB/GYN departments at all major teaching hospitals in the U.S, asking for chairpersons to confirm in writing whether that hospital is complying with federal sterilization regulations and requested copies of each hospital’s memo to staff explaining the regulations. One-third, or the 350, hospitals responded.

The medical establishment deeply resisted these rules protecting against abuse, but they were ultimately implemented and, in many cases, remain in effect today.  But that doesn’t mean that sterilization abuse was no longer a concern.

Throughout this period and into the present day, our work has been deeply shaped by NWHN charter member and long-time board member Dr. Helen Rodriguez-Trias, M.D., a leader in the fight against sterilization abuse in Puerto Rico, New York, and nationwide. Helen was a founding member of the Committee to End Sterilization Abuse (CESA), the first grassroots organization developed to combat forced sterilization.  CESA, a multiethnic organization, was responsible for crafting protective guidelines and leading a multipronged campaign to demonstrate community support for government action to end abuse. Read more about Dr. Rodriguez-Trias and her work to end reproductive coercion HERE and HERE.

Women who are incarcerated or otherwise detained by the state appear to be at highest risk these days. For example, a 2013 audit of state and federal prisons in California found that 144 tubal ligations had been performed on inmates, and that at least 25 percent were performed without legal consent. These data are, alarmingly, only from the time periods of 2005-2006, and 2012-2013, so the numbers are likely to be even higher.

The most recent case of sterilization abuse comes from September 2020. A whistle-blower who works in an ICE detention center filed a complaint citing concerns about the apparently high number of hysterectomies being performed on immigrants who are detained at the facility. Since then, multiple women have come forward to share their firsthand account of having been subjected to sterilization, including a former detainee who says she was sterilized without providing consent. As NWHN Policy Director Sarah Christopherson noted on behalf of the organization, these allegations must be viewed in the larger context of the U.S.’s shameful history of sterilization abuse, which has always been genocidal in its motivation. The NWHN strongly supports the congressional investigation into mass hysterectomies and medical neglect in ICE detention centers.

These are just a few of the myriad of stories and experiences of sterilization abuse suffered by marginalized peoples in the U.S.

The immigrant women in detention centers deserve autonomy over their bodies and reproductive choices, just like everyone else. This right does not depend upon a person’s race, ethnicity, gender, sexuality, religion, creed, or immigration status

The NWHN is also committed to ensuring that people have the most accurate information and high-quality health care in order to make their own decisions about what is best for their bodies and their health. We strongly support access to all contraceptive options, including fully informed and consented hysterectomies and sterilizations, and we reject any effort to direct or coerce women into using any specific method. We caution providers, public health officials, and policy-makers against assuming one method is better or worse for any individual based on his or her race, ethnicity, age, ability, economic status, sexual orientation, or gender identity and expression. Read more about the NWHN’s work on reproductive coercion, including our Statement of Principles on Long-Acting Reversible Contraception coauthored with SisterSong and signed by hundreds of organizations and individuals.

It is essential that we continue fighting and advocating for the rights of all individuals, including those who are marginalized and oppressed. If you want to get involved, contact your member of Congress and express your support for a full investigation of sterilization abuses in detention facilities. You can also ask your member of Congress to support the Dignity for Detained Immigrants Act, which supports immigrant rights.

Additional recent publications related to sterilization abuse in the U.S.